A game of crazy combos and epic explosions

Enter your email below to get updates about Ignite

IGNITE is a fast-paced game where you race to destroy opposing forges by commanding your minions to ignite, attack, and combo your way to victory! 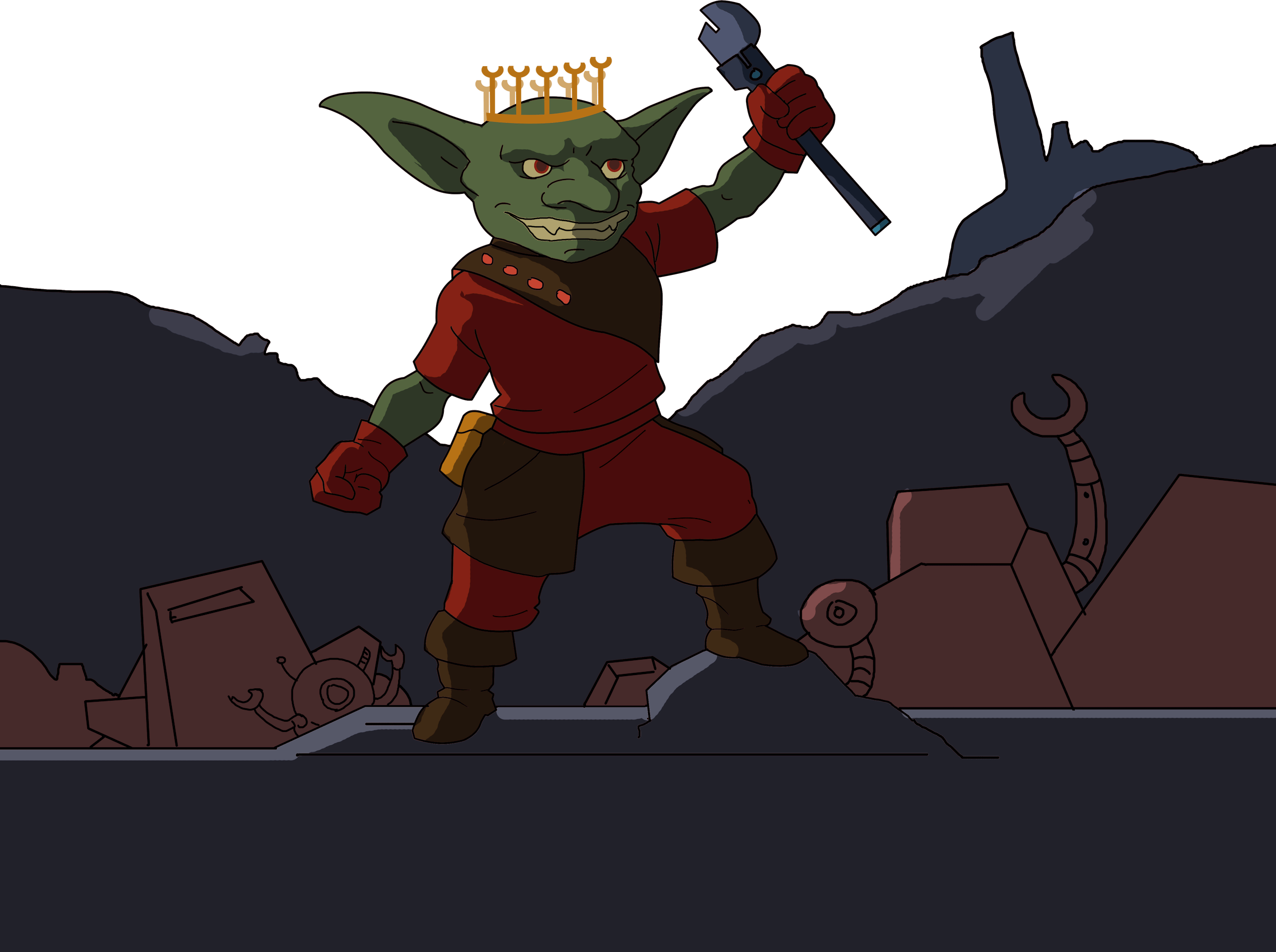 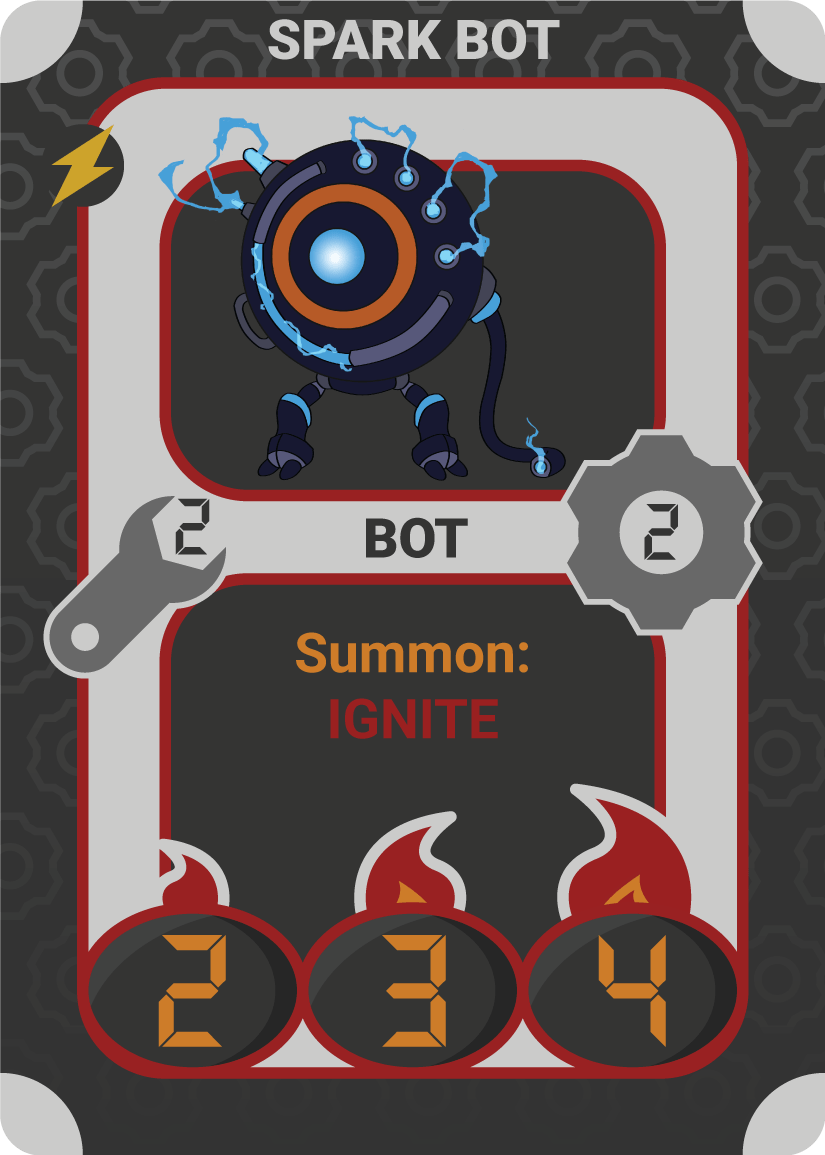 before they destroy yours! In Ignos, magical forges leftover from wars past are scattered around the land. Use your forge’s energy

to summon minions to attack, defend, and ignite

for you. Set up your forgeling to tinker with your bots to produce insane combos. You'll need your forgelings' mechanical skills and the luck of random ignitions to destroy and conquer your opponent’s forge in this quick, action packed game.

Forge: If your forge

is destroyed, you lose, and the last one standing wins! You control a forge of 30 minions to battle for you. When your forge takes damage, simply remove that many cards from it. When you run out of cards in your forge and take damage, you lose.

is where your destroyed cards go, and your capacitor is where you keep your energy 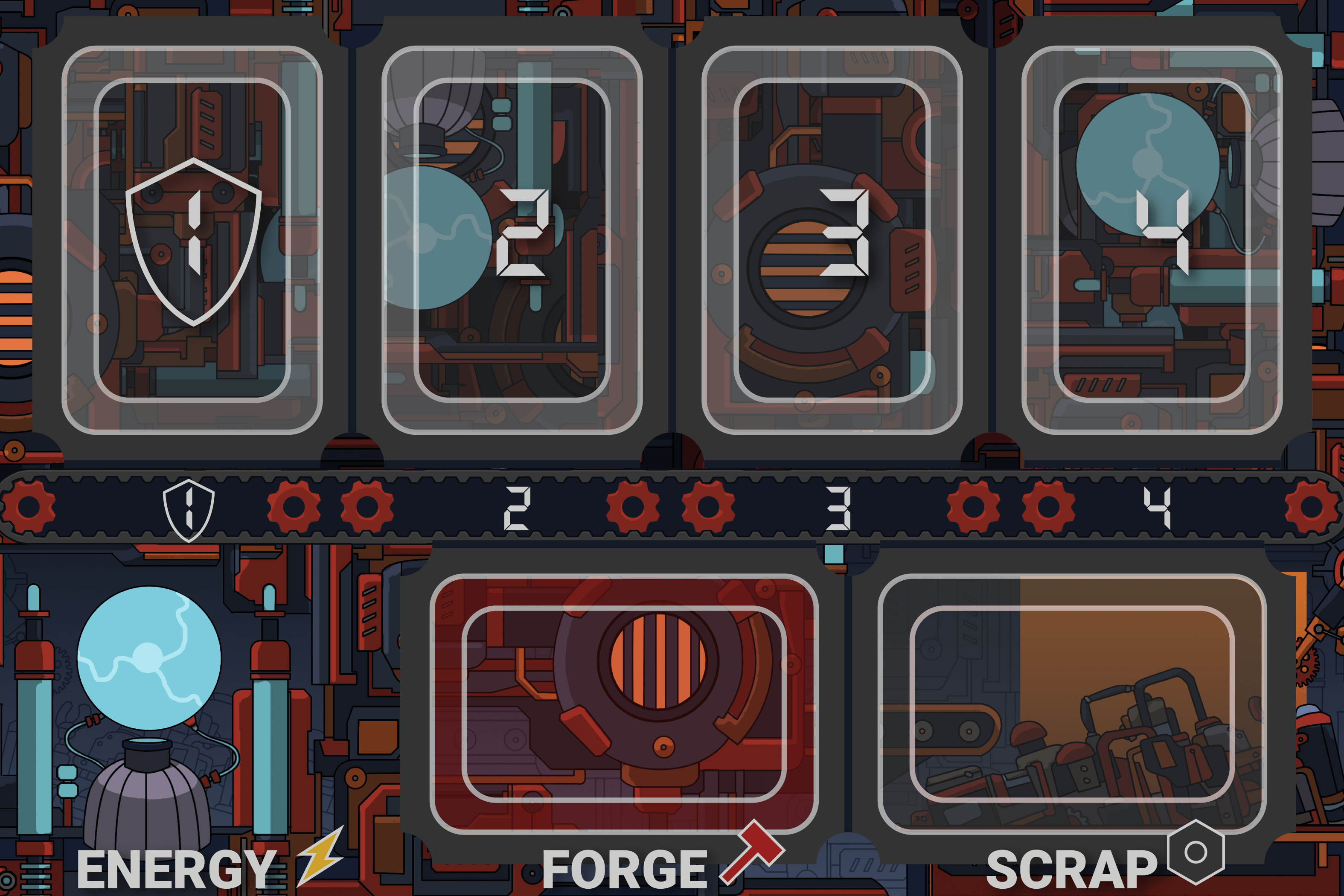 each turn to summon minions from their hand or draw cards. Minions have energy costs on the top left of the card, and each card drawn costs 1 energy. At the start of your turn, your capacitor charges up to 4 energy. The first turn of the game starts with 2 energy.

Lineup: Your lineup is at the top of your board, and it has four numbered slots to summon minions. Minions can be summoned to any open slot.

Hand: Your hand is where you keep minions ready to be summoned. It's hidden from other players. At the start of the game, you draw 5 cards. 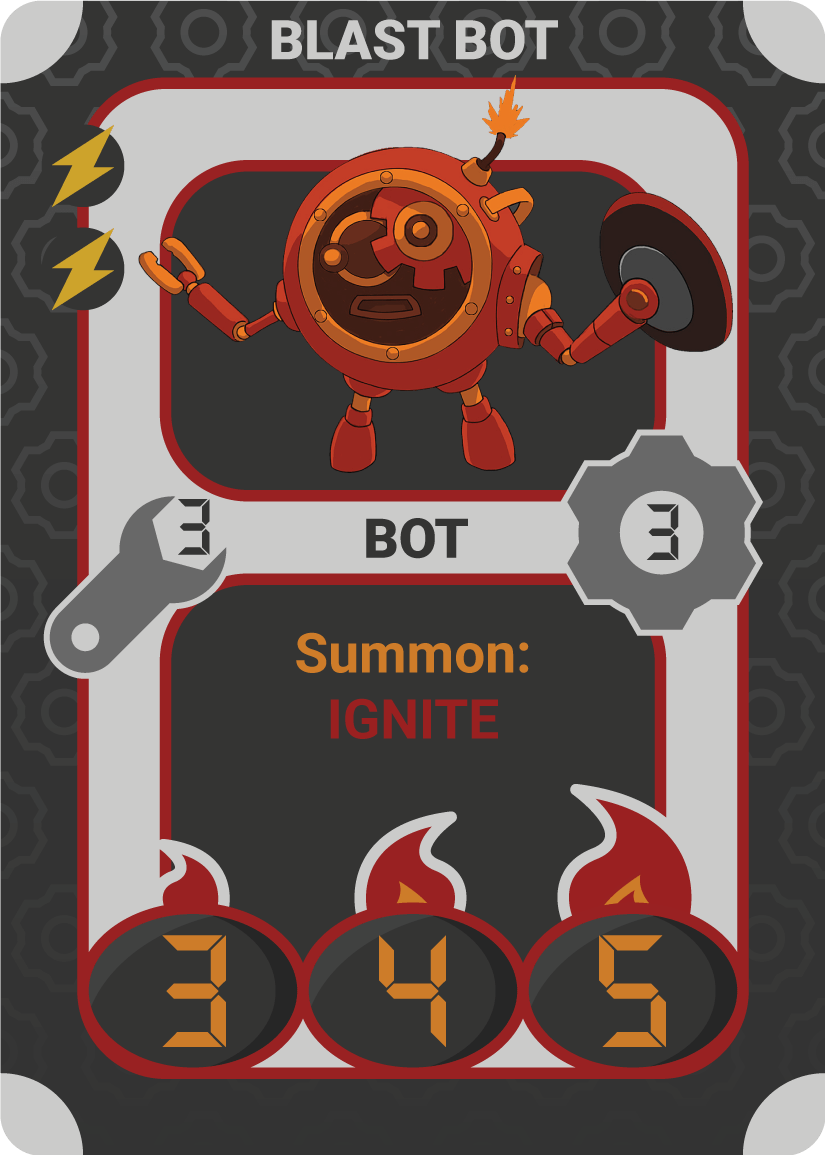 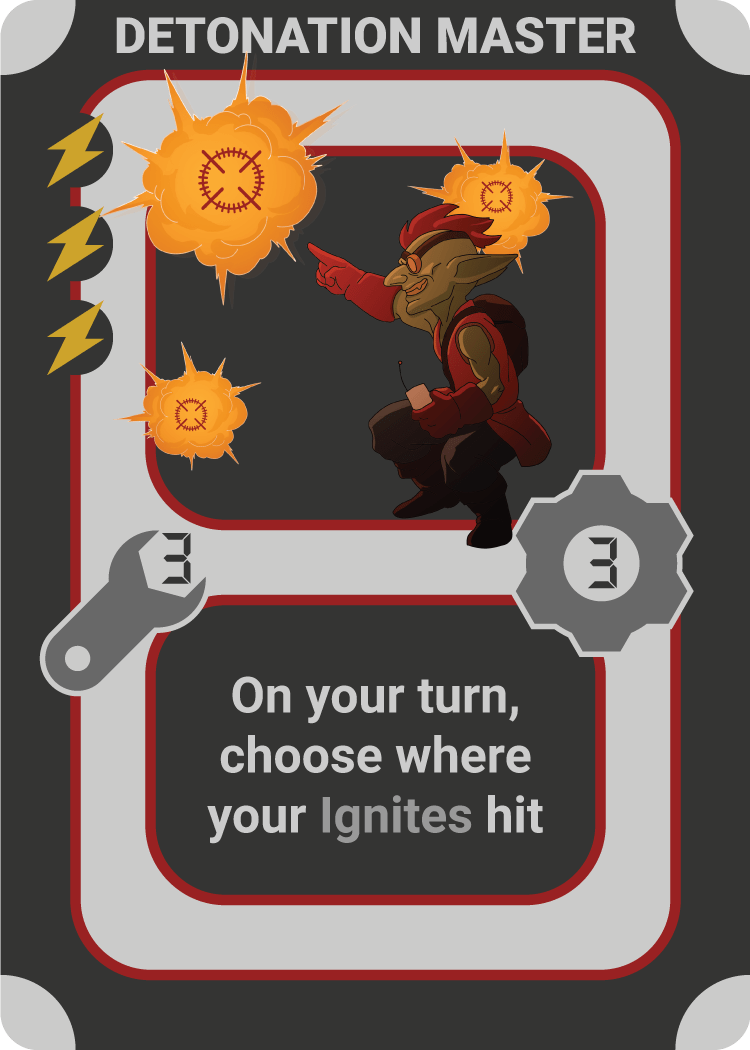 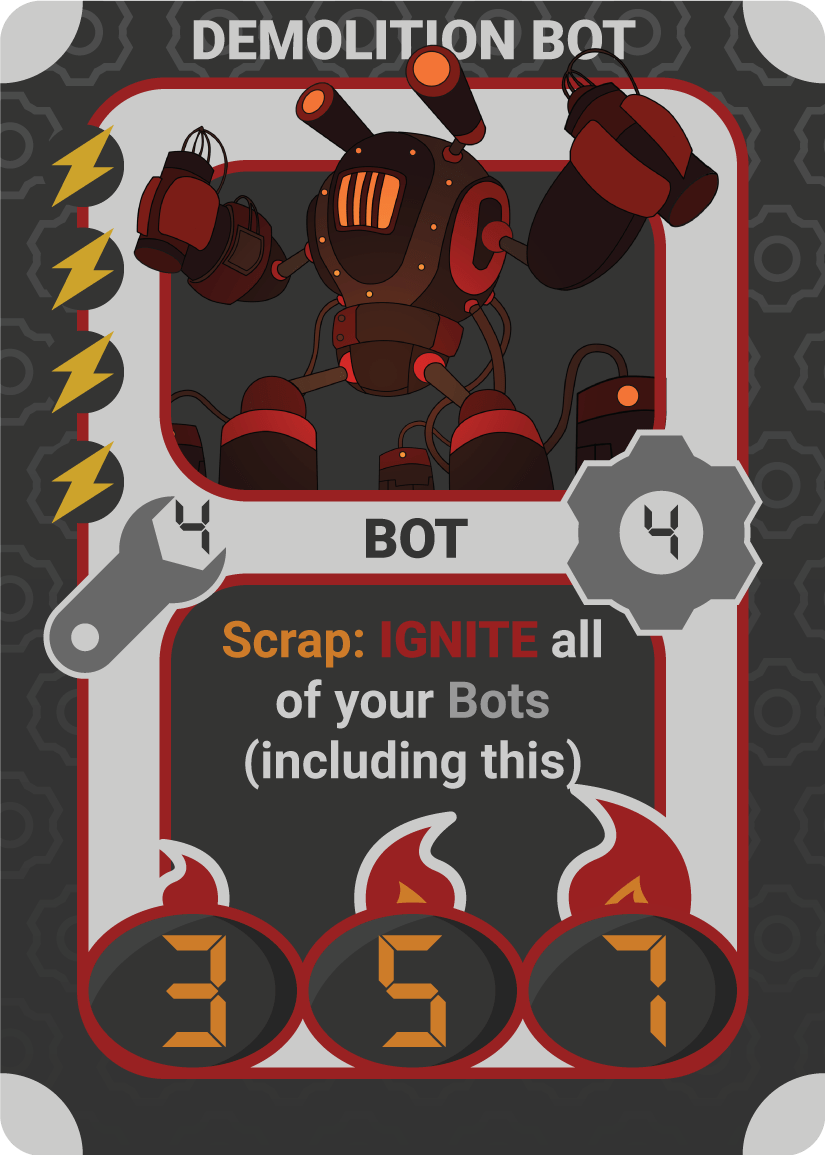 Your forge is filled with bots that ignite and forgelings (curious, evil gremlin creatures) that love tinkering with your bots. By attacking, igniting, and combining your cards, you can destroy your opponent's minions, destroy their forge and win the game!

Parts: All minions have an energy cost

and if they have more damage than health

, they are destroyed. Damage reduces health AND attack, and is represented by damage counters:

Turns: There are two parts of your turn: attacking and building. When you attack, you can choose any number of your minions to attack any opposing target (minion or forge) with one exception: you must attack and destroy their Forge Guardian

(minion on slot 1) before attacking any other target. During building, you spend energy to summon minions and draw cards.

When you IGNITE, you roll the two ignite dice (try our roller). One die determines which target you hit and the other determines how much damage you deal. The target can be either slot 1-4, or forge. The damage dealt corresponds to the ignite values on the bot igniting.

Multiplayer: Ignite scales great with more players! Players simply sit in a circle, can only attack adjacent players, and ignites

hit BOTH players! Get ready for some chaotic fun! 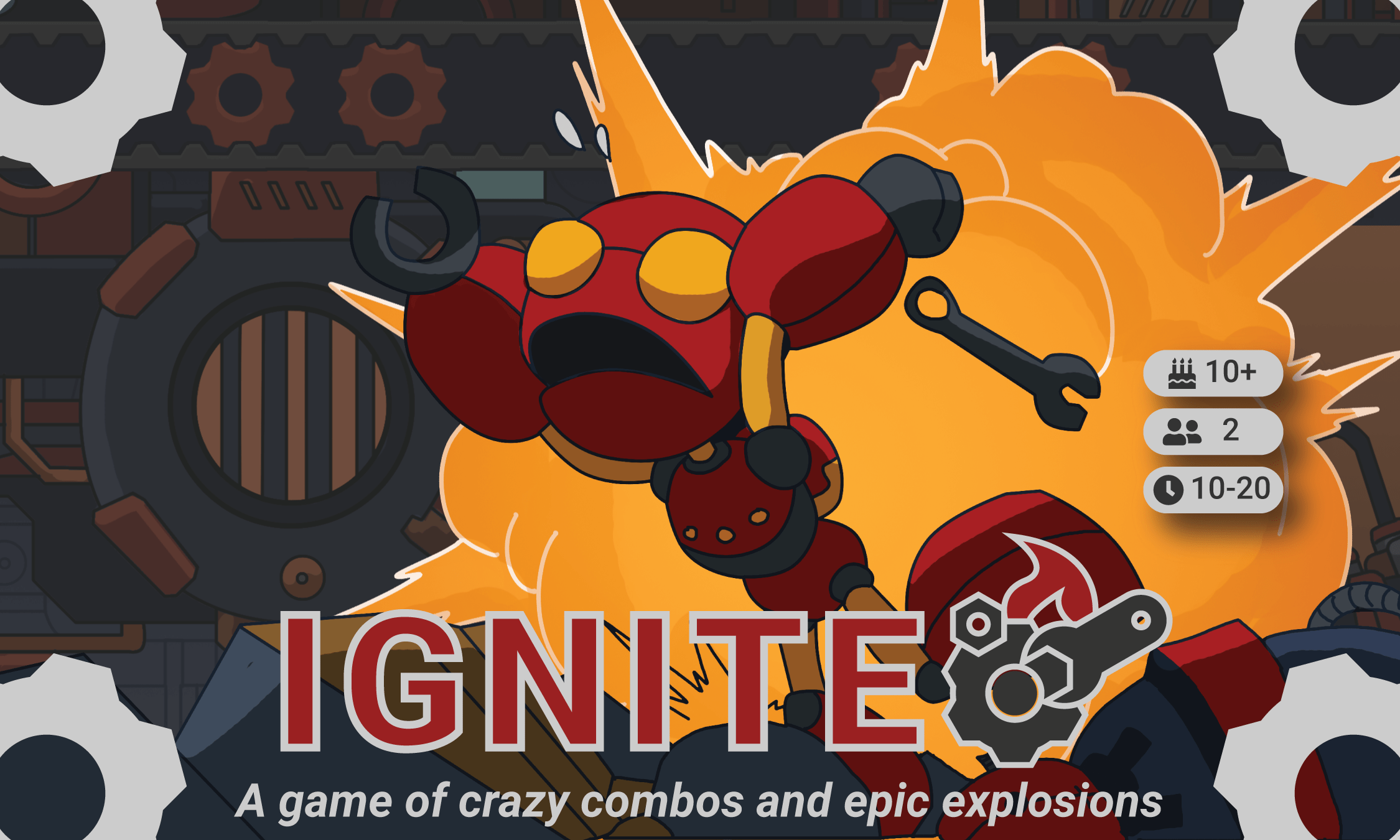 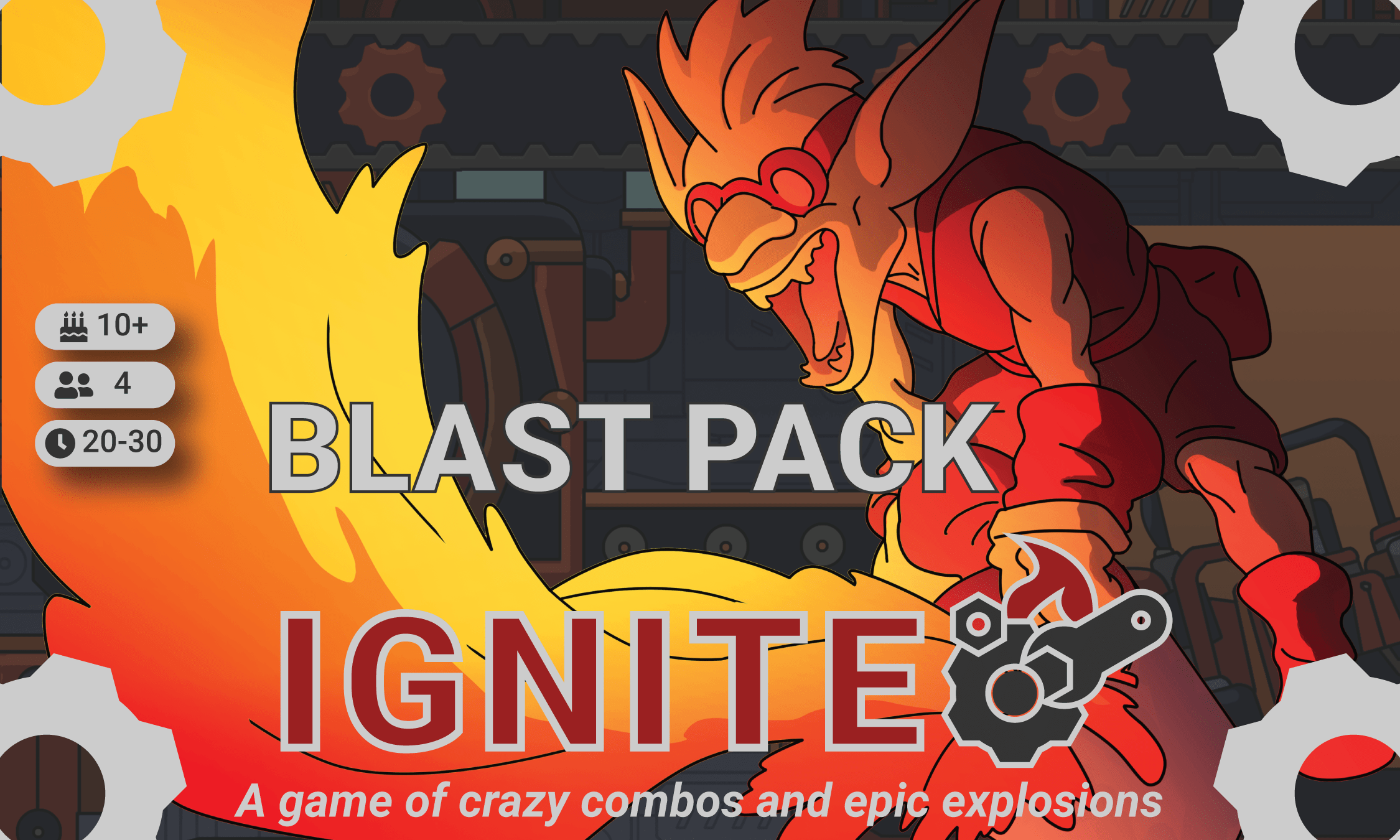 What next? View all of the cards in the GALLERY or check out a detailed review of the CONTENTS or RULES of the game.

Why are we so special? Check out our GOALS.

Not for you? Ignite makes a great gift, and will come to your doorstep in time for holiday season this winter.